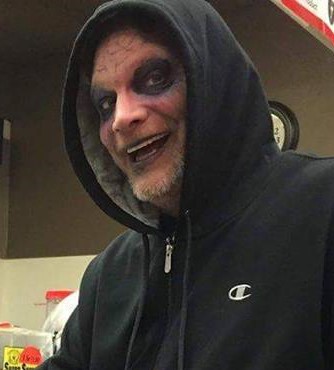 'In dating scene where a swipe of the finger determines someone's worthiness of love, a few hearts are bound to be broken. For Jenny, heartbreak is all to familiar. Used by countless... See more » Director:  Michael Coulombe Writer:  Brantley J. Brown Stars:  David Blanco ,  Vanessa Esperanza
Topics: Valentines Day, killer

A priest with a haunted past and a novice on the threshold of her final vows are sent by the Vatican to investigate the death of a young nun in Romania and confront a malevolent force in the...  See more » Director:  Corin Hardy Writers:  Gary Dauberman ,  James Wan ,  Gary Dauberman Stars:  Demián Bichir ,  Taissa Farmiga ,  Jonas Bloquet   See more »
Topic: The Nun (2018)

A little girl with formidable powers imagines into existence the Sandman, a terrible monster from her nightmares that brings harm to anyone who wants to hurt her. Director:  Peter Sullivan Writer:  Peter Sullivan Stars:  Haylie Duff ,  Tobin Bell ,  Shaun Sipos   See more »
Topic: The Sandman (2017)

A college student who will do just about anything for Internet fame is kidnapped by a fan, and her reluctant roommate is the only one who can save her in this horror satire of popularity... See more » Directors:  Sophia Cacciola ,  Michael J. Epstein Writers:  Jeremy Long ,  Michael J. Epstein Stars:  Amanda Colby Stewart ,  Brandi Aguilar ,  Seth Chatfield   See more » Awards:  5 wins & 16 nominations.  See more »
Topic: Clickbait (2019)

A young lady stumbles upon a website that introduces her to a new song: Deathsong. But what happens when people listen to it? Director:  Michael Coulombe Writers:  Brantley J. Brown ,  Michael Coulombe Star:  Taylor Murphy-Sinclair
Topic: Soundbite (2018)

In the near future, 10 death row convicts are forced to compete in a virtual reality game that pits them against dinosaurs and each other. Director:  Ryan Bellgardt Writers:  Ryan Bellgardt ,  Galen Christy Stars:  Ryan Merriman ,  Perrey Reeves ,  Adam Hampton   See more »
Topic: The Jurassic Games (2018)

On a mission to bring the Devil to Earth, an escaped demon manipulates a group of friends hanging out on a video-chat. Because this ruthless demon can possess multiple people at once,...  See more » Director:  Jeremy Wechter Writer:  Jeremy Wechter Stars:  Julia Kelly ,  John Anthony Wylliams ,  Christopher Daftsios
Topic: E Demon ( 2018)

Four American best friends decide to take the back roads travelling to a wedding in England, on their way a deadly secret forces the girls to be stranded in the woods, where they discover a...  See more » Director:  Dan Allen Writers:  Dan Allen ,  Scott Jeffrey Stars:  Kate Lister ,  Lucy-Jane Quinlan ,  Becca Hirani
Topic: Unhinged (2017)

A group of five women go camping in the woods to celebrate a friend's birthday over 4/20 weekend. But when they cross the turf of an illegal marijuana grow operation they must struggle to...  See more » Director:  Dylan Reynolds Writer:  Dylan Reynolds Stars:  Jamie Bernadette ,  Vanessa Rose Parker ,  Stacey Danger
Topic: 420 Massacre ( 2018)

Based on true events. Aesha goes to an isolated b&b in Kent after her mom books her in so she can get some head space for her studies. In the night Aesha is visited by a nun at the door who...  See more » Director:  Scott Jeffrey Writer:  Scott Jeffrey Stars:  Becca Hirani ,  Lucy Chappell ,  Chris Kaye
Topic: Bad Nun (2018)

Hitch, the most popular Rideshare app, has created safe rides for millions. At least, that's what they want you to think. It was only a matter of time before the story went public. The story...  See more » Director:  Tremain Hayhoe Writer:  Tremain Hayhoe Stars:  Bradley Laborman ,  Syd Wilder ,  Curtis McGann
Topic: Rideshare (2018)

Two schoolboy delinquents learn a lesson that they will never forget when a teacher at the end of his tether decides to abduct them.
Topic: The Lesson (2015)

In the summer of 1989, a group of bullied kids band together to destroy a shapeshifting monster, which disguises itself as a clown and preys on the children of Derry, their small Maine town.
Topic: It (2017)